Kvitova, Kerber advance to third round at US Open 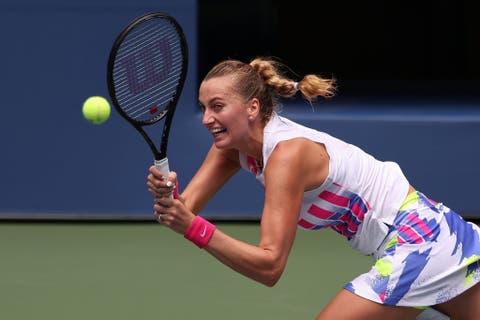 Petra Kvitova advanced to the third round of the US Open on Wednesday, defeating Kateryna Kozlova of Ukraine 7-6 (7/3), 6-2.

Czech sixth seed Kvitova, chasing a third Grand Slam crown after wins at Wimbledon in 2011 and 2014, needed 1hr 40min to claim her place in the last 32.

The 30-year-old, who has never been past the quarter-finals at the US Open, will face either Belgium’s Kirsten Flipkens or Jessica Pegula in the third round on Friday.

Kvitova admitted she is still adjusting to the eerily quiet conditions at this year’s US Open, which is being played behind closed doors as part of a range of measures to guard against COVID-19.

“Everything is totally different,” Kvitova said. “Sometimes you play unbelievable shot and there is just three clapping.

“I have to still push myself to be more mentally focused. It’s a little bit like a practice without the fans … I really have to be still reminding myself to be there for every point.”

Kvitova was one of several seeds to advance safely in early games Wednesday as the draw once again went largely to form.

Martic, who reached the fourth round at Flushing Meadows last year in what remains her best US Open appearance, will face Russia’s Varvara Gracheva in the third round.

Mladenovic suffered a meltdown for the ages as she slid to defeat, collapsing from a 6-1, 5-1 lead and blowing four match points along the way.

“It is definitely the most painful match and loss I have had in my career because it’s a Grand Slam,” a disconsolate Mladenovic said afterwards.

“I was playng really good tennis there and I just couldn’t close it out, couldn’t convert my match points. I didn’t take my chances. I just collapsed. I had nothing left in the tank.”

Another seed to tumble early Wednesday was the Czech Republic’s Marketa Vondrousova. The out-of-sorts 12th seed was beaten 6-1, 6-2 in little more than an hour by Belarus’ Aliaksandra Sasnovich.

Germany’s Angelique Kerber, the 2016 US Open champion, booked her place in the third round with a straight sets win over compatriot Anna-Lena Friedsam.

This year’s women’s draw in New York is more open than ever following a slew of withdrawals by top players due to the coronavirus pandemic.