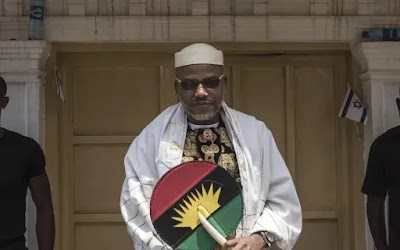 The leader of Indigenous People of Biafra (IPOB) Nnamdi Kanu has denied allegation his organisation is responsible for purported attacks on security operatives in South East and South South.

He declared IPOB has no plan to engage in armed struggle.

He said in a statement by the IPOB Media and Publicity Secretary, Emma Powerful at the weekend that the allegation against the organisation was false and cheap propaganda.

According to him: “Some amorphous groups including the non-existent Igbo Nigeria Movement (INM) and similar faceless groups recruited by the DSS have been going about making untenable allegations and defamatory media remarks scripted by their paymasters against IPOB.”

Kanu said the allegation was an attempt to discredit IPOB before the international community and wondered how unarmed organisation would attack armed security personnel and escaped unhurt.

“We are not armed and have no plans to pick up arms. But should we decide to go into arms struggle which is not an option on the table, it will not be a secret affair.

“We won’t depend on arms collected from any security agent to defend Biafra. That is childish and an insult to IPOB,” it said.

The statement added: “Their latest lie is the allegation that IPOB is responsible for the purported attacks on security operatives in South East and South South.

“We find it amusing how these unscrupulous elements without any contact address would think they can come to limelight via untenable allegations against a globaly recognized peaceful group like IPOB.

“We knew when and how the DSS recurited them to launch verbal attack against IPOB and its Leader, Mazi Nnamdi Kanu. But we want to inform them that IPOB is properly rooted and cannot be moved by false allegation and propaganda.

“These irritants have sustained their unwarranted attacks on IPOB through fabricated and blatant lies, and cheap propaganda to impress their pay masters, the DSS.

“Assuming but not conceding to this blatant falsehood: How can an unarmed man attack a fully armed security agent and escape unhurt? Doesn’t it sound funny?

“What a shameful allegation! We know their aim: to discredit IPOB before the international community which is now interested in the matters we have raised concerning the atrocities perpetrated in Nigeria.”