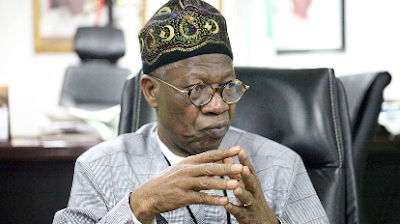 The Federal Government has said that the administration of former President Goodluck Jonathan created the problem in the power sector by selling the power generating and distributing companies to incompetent investors.

Information and culture minister Lai Mohammed stated this on Saturday in Lagos at a meeting with the Online Publishers Association of Nigeria.

He said that the government could no longer afford the cost of the subsidy, especially under the prevailing economic conditions.

The minister noted that the revenues and foreign exchange earnings by the government had fallen by almost 60 per cent due to the downturn in the fortunes of the oil sector.

“Before we came in, the power sector had been privatised by the previous administration, but the people they sold to them are incompetent.

“When we assumed power, we met the mess.

“We took over the debt of the Discos, which was about N701 billion, because of the effect the cancellation of the sale will have on the country and international investors.

“The people are simply incompetent and if we did not provide the money that means they will not distribute power to anybody,” he said.

The minister noted that the government did not have the resources to continue along the path of subsidising electricity tariff to private companies.

“To borrow just to subsidise generation and distribution, which are both privatised, will be grossly irresponsible,” Mohammed stressed.

To cushion the effects of adjustment of the tariff, the minister said that government was providing incentives to local manufacturers of meters through the Central Bank of Nigeria

He said that companies importing meters would get incentives through tax waivers.

Mohammed added that in order to protect the large majority of Nigerians who could not afford to pay cost-reflective tariffs, only customers with guaranteed minimum of 12 hours of electricity would have their tariffs adjusted.

He said that the industry regulator, Nigerian Electricity Regulatory Commission (NERC), would ensure that those who get less than 12 hours supply experience no increase.

In addressing the complaints about arbitrary estimated billing, he said that mass metering programme was being undertaken to provide meters for over 5 million Nigerians.

The minister said that the government was also taking steps to connect Nigerians not yet connected to electricity at all, to the facility.

“As you are aware, under its Economic Sustainability Plan, the government is providing solar power to 5 million Nigerian households in the next 12 months.

“This alone will produce 250,000 jobs and impact up to 25 million beneficiaries through the installation, thus ensuring that more Nigerians will have access to electricity via a reliable and sustainable solar system,” he said.

The minister assured Nigerians that the service-based electricity tariff adjustment and the ongoing work by German company, Siemens, to boost power supply in Nigeria, would help end the perennial power problem in the country.

The minister thanked Nigerians for their understanding and appealed to them to bear with the government.