I’m angry because we’ve not been paid, says policeman deployed for Edo election 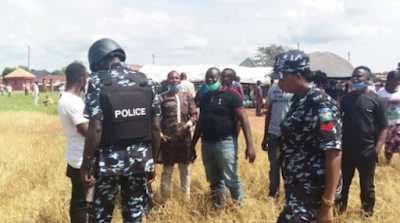 A policeman at one of the checkpoints on Auchi-Igarra road in Edo has expressed anger over the non-payment of allowances for officers on election duty in the state.

Voting, which commenced as scheduled at 8:30am, is ongoing in Edo as the state takes a decision on who will become governor for the next four years.

According to the officer, other policemen who were deployed from other states for the purpose of the election had been paid, but officers working in Edo have not received their allowances.

Some of the policemen were seen stranded on the Igarra-Auchi highway, as they attempted to fix a Mercedes Benz car conveying them to their duty post.

Meanwhile, in another development, thugs alleged to be loyal to Osarobo Idahosa, leader of the All Progressives Congress (APC) in Ikpoba-Okha local government area (LGA) of Edo state, have openly threatened people who came out to cast their votes for the Peoples Democratic Party (PDP).

The thugs, who were present at polling units 44 to 47, asked the voters to go home, and threatened to unleash terror on anyone caught recording the incident on camera.

“If you’re for PDP, go home. I’m saying it now even in the presence of security operatives. When soldiers come, I’ll still announce it. Nobody should also film anything,” one of the men announced.

Idahosa was at the polling unit while the thugs yelled at the voters to obey their order.

Shortly after the threats, some voters were seen leaving the polling units.

Speaking on his experience, one of the voters who chose to remain anonymous said: “I’m too old to be beaten by some thugs.”

“I won’t vote if that’s the case; this is not how to conduct election,” another voter lamented.

Narrating the incident, Maxwell Akpjunor, a voter at polling unit 44 in ward 6, said some of the voters reported the issue to the policemen present there, but the security operatives did nothing about it.

“One of the thugs met a voter in front of me and said to him that if he votes for APC, he (thug) will give him N8,000, but the PDP voter refused,” Akpjunor said.

Ahead of the election, the Independent National Electoral Commission (INEC) had urged both political parties and voters to observe the guidelines in the code of conduct, so as to deliver a free, fair and credible process.