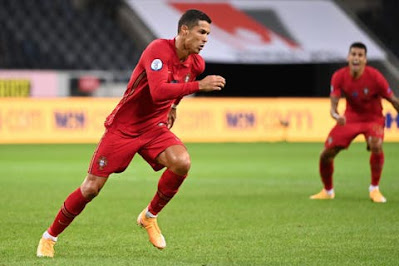 Veteran Sweden midfielder Gustav Svensson was sent off just before half-time for collecting a second yellow card, and from the resulting free-kick, Ronaldo fired the ball into the top corner to bring up his landmark century.

After 72 minutes, the Juventus forward – who missed Portugal’s Nations League opener against Croatia on Saturday with a toe injury – curled in a second goal from the edge of the penalty area.

Ronaldo has set his sights on Iranian Ali Daei’s record for a male international of 109 goals.

“I managed to beat this milestone of 100 goals and now (I’ll go) for the record. It’s step-by-step. I am not obsessed because I believe the records come in a natural way,” Ronaldo said.

“When I had this problem in my toe I always knew that I could recover for this second game.”

Asked about his future in the game, Ronaldo was quoted by Reuters as saying: “The future, only God knows. I am happy to play with these young players and I am enjoying a lot this moment both individually and collectively.

Portugal have two wins from their opening Nations League fixtures, and top the table ahead of France, who beat Croatia 4-2 in Paris.

Defender Dejan Lovren had put the 2018 World Cup runners-up ahead after 17 minutes following a corner, but Antoine Griezmann drew France level just before the break.

In stoppage time, Manchester United forward Anthony Martial saw his sliding effort deflect in off ‘keeper Dominik Livakovic for an own goal.