I treat Ize-Iyamu like my younger brother, he respects me – Gov Obaseki 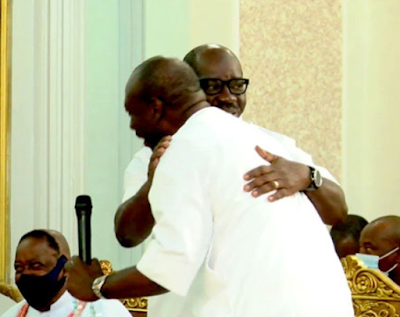 The Governor of Edo State, Godwin Obaseki, has said there is no animosity between him and Pastor Osagie Ize-Iyamu, the governorship candidate of the All Progressives Congress, APC, for the September 19 election.

Obaseki explained that he treats the APC candidate like his younger brother and he (Ize-Iyamu) reciprocates with respect like unto an elder brother.

The incumbent Governor spoke at the palace of the Oba of Benin, Ewuare II, on Wednesday when key political players gathered for a peace meeting.

Oba Ewuare II summoned the meeting to end the violence in the state witnessed during campaign rallies.

Obaseki claimed he had never and would not participate in any election violence as the chief security officer of the state.

“Actually, the point I’ll make, Your Majesty, is that I’m acting in two capacities: as the chief security officer of the State as the incumbent Governor and as a candidate. I think it’s important that I make that separation, he said.

“That’s why I’m emphasising that as the chief security officer and incumbent, I swore to an oath and I don’t have any issue with swearing to that oath to my God that I will not participate, I’ve never participated, I’ll never participate in violence particularly when it affects the people I’m governing.

“I’ll never. I’ve never. Let it also be on record that I have no problem whatsoever with my brother, Osagie Ize-Iyamu. We are contesting for the same position but we have no personal animosity between us.

“I treat him like my younger brother and he respects me. He gives me my respect and that is the relationship we enjoy. So, Your Majesty, I just wanted to make that point.”