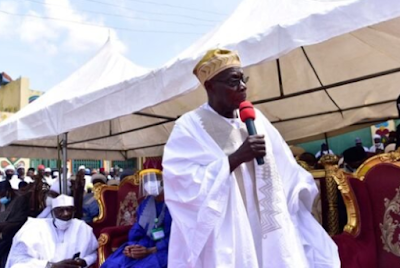 Former President Olusegun Obasanjo has described Shehu Idris, the late Emir of Zazzau, as a man of peace.

Idris, who spent 45 years on the throne, died at the 44 Army Referral Hospital, Kaduna, on Sunday.

Speaking at a Fidau prayer held in honour of Idris, Obasanjo said the late emir was his personal friend and confidant.

He recalled that when he had some challenges in Plateau state during his tenure as president, it was the late emir that he contacted for solution.

He said the late Idris was of great help to him when he was a military head of state and a civilian president.

“I got from him all the help I need on running the affairs of this country as best I can remember,” he said.

“I remember a particular problem I had in Plateau and I had nobody to help me in meditation and reconciliation in sorting out the aged-long problem, then I called him.

“The emir was a man of peace; a man who shows no discrimination either ethnically, religiously or socially.”

The former president said his visit to Zaria was to celebrate the late emir for his good works and not to mourn him.

Obasanjo said whether anybody likes it or not, “sooner or later, we have to depart; my prayer is that the life of peace he has lived and the peace that descended in Zazzau Emirate during his reign may continue in Kaduna state and the whole of Nigeria”.

On his part, Kayode Fayemi, who led the delegation of governors, said the late emir spent meritorious years on the throne, leading to significant development in education and culture in the community.

He described the late emir as a bridge builder and prayed that God will grant him eternal rest.

Nasir el-Rufai, governor of Kaduna, said the late monarch was “always there to guide my administration”, adding that the state benefited immensely form Idris’ wealth of experience, having worked with over 20 past governors of the state.