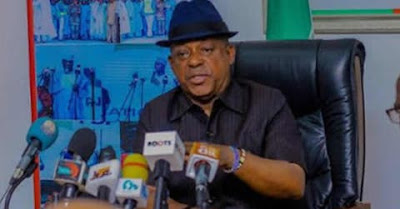 The National Chairman of the Peoples Democratic Party, Uche Secondus, has said President Muhammadu Buhari and the All Progressives Congress have failed Nigerians.

He said the PDP under his leadership identifies with the suffering citizens who have been exposed to unprecedented hardships, poverty, hunger, and death on account of the regime’s failure to fulfill its campaign promises to protect lives and livelihoods.

The PDP National Chairman said this while addressing party supporters who thronged the PDP Legacy House, Abuja, on Wednesday.

The PDP members were in Abuja to protest the hike in the pump price of petrol and electricity tariff as well as the rising cost of living in the country.

Secondus said, “When they were looking for power in 2015, they promised to provide jobs for our youths, they promised to reduce the pump price of petroleum products and protect lives and property, what do we have today? When they took over, a bag of rice was N18,000 today it is N35,000 is this progress?”

He advised the administration to admit its failures and make policies that will encourage a private sector-driven economy as a way out of the current national quagmire.

He said the recent increase in the pump price of petrol was unjustifiable noting that the same regime promised to fix refineries but has reneged.

The party chairman also said it was laughable that the regime and its enablers gathered together at the Villa on Tuesday to “clap for themselves,” over unverifiable claims of achievements.

Meanwhile, the APC in a statement titled, ‘Petrol, Electricity Deregulation: Hypocrisy of PDP, Atiku Exposed – APC…Freed Up Cash Funding Critical National Infrastructure,’ signed by the Deputy National Publicity Secretary, Yekini Nabena, said the PDP and former Vice President Atiku Abubakar were being hypocritical in their assessment of issues relating to the increase.

Nabena said, “As genuine patriots, reputable groups and organizations, make honest contributions to the reactions about the deregulation of electricity and petrol prices, we receive with some amazement comments attributed to the Peoples Democratic Party, and Alhaji Atiku Abubakar, condemning the decision of the Buhari administration to deregulate the PMS sector.

“The PDP and Atiku’s reaction to what has been adjudged an inevitability by many experts clearly depicts the height of hypocrisy demonstrated by them on many issues relating to the progress and wellbeing of Nigeria.

“The PDP’s outburst indeed exposes once again its real fraudulent character and plot to patronize Nigerians and make them suffer in perpetuity by keeping a fraudulent subsidy arrangement that feeds a few individuals at the expense of the masses.”