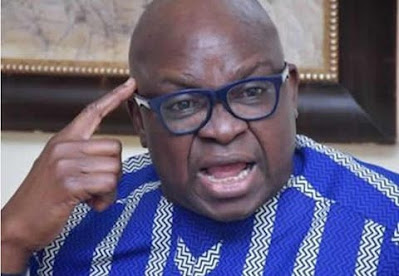 Former Ekiti State Governor, Ayodele Fayose, says he agrees with former President Olusegun Obasanjo that Nigeria is becoming a failed state and can crumble if nothing urgent is done to address the country challenges.

Fayose made this known on Saturday night in an Instagram Live Chat with the Chief Executive Officer, Ovation Media Group, Dele Momodu.

It was earlier reported that Obasanjo at an event in Abuja said Nigeria was slowly becoming a failed state that urgently needed to be pulled from the brink of collapse.

The former President also stated that he had never seen Nigeria so divided, adding that many of the problems currently plaguing the country were due to the recent mismanagement of Nigeria’s diversity.

Reacting during the one-on-one, Fayose said though he usually won’t agree with Obasanjo on national issues, however, all that he said of the administration of President, Muhammadu Buhari in 2015 were becoming reality.

The former governor, who said there was nothing personal between himself and Buhari, lamented the insecurity and rising debt profile of the country, saying “only God will deliver Nigeria”.

Fayose said, “Of all the Presidents, I don’t like Obasanjo ways, I tell you the truth; I don’t like his ways at all. Me and him we are not on the same page but Obasanjo is the only one-time Nigerian President that has helped this country here and there.

“When I started talking about President Buhari, even you, Dele Momodu, criticised me. Even you, Dele Momodu was looking at a saint in Buhari. Today, most of you now should cover your faces in shame, that you gave Nigerians a wrong road and a wrong path. It’s regrettable.

“Everything I said about that government at the time, when it was still in embryo, everything has happened today.

“I said in 2015 that President Buhari will be a shield for the looters to bleed this country. I said so many things that this President has no capacity.

“My brother, have you seen a country govern the way this country is being governed? Have you seen one? Everybody now, we are in crisis, we are trouble, the economy is in trouble. You remember, Operation Occupy Nigeria? Where are these people now? You people should occupy again, we are waiting for you to occupy. This country is in trouble, we need God, we need intervention.

“Look at our debt profile. We may wake up one day and they say China has come to take over. So, we should handover to China. It is a very sad development. If they don’t address the electoral process in this country, we are going nowhere. When the government begins to fear the people, things will change.

“This APC in five years is dastardly, more terrible than the PDP in 16 years.

“Nothing is personal between me and President Buhari, he didn’t take my wife and I don’t even have the capacity to take his wife but this country is not governed well.”