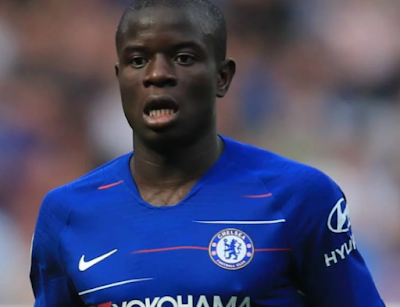 Chelsea head manager, Frank Lampard, has played down speculation that midfielder, N’Golo Kante, could be set to leave the Blues for Inter Milan this summer.

Recall that reports earlier this week suggested that Kante had emerged as a target for Inter Milan manager, Antonio Conte, who is targeting at least three players, including Emerson Palmieri and Olivier Giroud from Chelsea this summer.

Conte wants to be reunited with Kante to improve his squad ahead of the 2020/21 season.

Reacting to the development ahead of Chelsea’s Premier League tie with Brighton on Monday, Lampard insisted that Kante is “fundamental” to his plans for the new season, adding that he would do everything within his power to keep the France international at Stamford Bridge.

Asked about reports linking Kante with a move to Inter Milan, Lampard told BBC Radio 5 Live: “I think pretty much every club in the world would want N’Golo Kante.

“I saw those reports as well. He is an incredible player, and I certainly do not want to lose him, no.

“He is fundamental to what I am trying to do. We can obviously talk about the attacking players we’ve but someone like N’Golo and the work he does in midfield.

“It was a difficult year for him last season because of the injuries.

“He looks fit and fresh at the moment so, no, he is a big deal to me, and of course I want to keep N’Golo.”