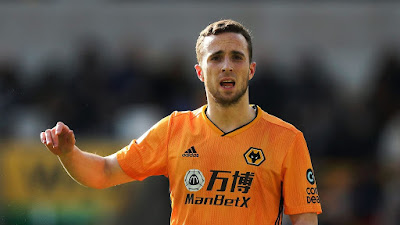 Liverpool have agreed a deal with Wolves on their forward, Diogo Jota, to join the Reds on a five-year contract this summer that will see him stay at Anfield until 2025.

The Evening Standard reports that Liverpool will pay Wolves an initial fee of £41m for Jota, which could rise to £45m with further payments and add-ons.

Liverpool will pay the fees for Jota in installments, with only around £4m to be paid over the next year.

Jota is now set to be Liverpool’s third signing of the summer following the arrivals of Kostas Tsimikas from Olympiacos and Thiago Alcantara from Bayern Munich.

The 23-year-old will be confirmed a Liverpool player in the next few days.

The Portugal international will not be a Liverpool player in time to play against Chelsea in the Premier League on Sunday at Stamford Bridge, but he could be registered in time for their trip to Lincoln in the EFL Cup on Thursday.

Jota, who is set to battle the likes of Mohamed Salah, Sadio Mane and Roberto Firmino in Jurgen Klopp’s starting XI, will become the fourth most expensive signing in Liverpool’s history behind Virgil van Dijk, Alisson Becker and Naby Keita.