El-Rufai accused of delay in naming new Emir of Zazzau, runs to Buhari 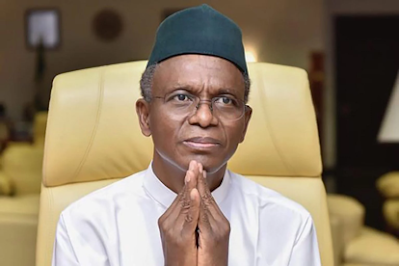 Despite the submission of three names to the Kaduna State Government for the appointment of a new Emir of Zazzau, Governor Nasir El-Rufai, has yet to make any pronouncements.

It is not a secret that the kingmakers nominated three princes last Thursday.

The rigorous exercise was witnessed by top government and security officials El-Rufai himself dispatched.

They were led by the Secretary to the State Government (SSG), Balarabe Abbas.

Eleven princes from the four dynasties of Zazzau emirate had declared their intention to succeed the late monarch, Shehu Idris.

After a stringent process which saw the use of at least 7 criteria, the final candidates emerged.

All contenders were scored at 20% for being a District Head, 15% for having a Degree or HND, 10% for Public Service, 10% for no proven adverse report, 15% for a good relationship with the public, 10% for physical fitness, and 5% for a national award.

After three rounds of voting (normally concluded in one round), Iyan scored 89%, Yariman 87%, and Turaki 53%.

Last Friday at the Government House, the kingmakers formally handed their names to the SSG and Commissioner of Chieftaincy Affairs.

But instead of picking one, El-Rufai announced on Facebook last Saturday that he was reading books on wisdom, he has been accused of delay tactics.

“While awaiting the review of the kingmakers’ report by the Ministry for Local Government, I am on my third and final book on the selection process – Dr Hamid Bobboyi’s Principles of Leadership According to the Founding Fathers of the Sokoto Caliphate…Please continue to pray for me to choose the Emir that will prepare Zazzau Emirate firmly to flourish amidst the challenges of the 21st Century”, he wrote.

But it is not true that El-Rufai was waiting for the report because it was submitted to the SSG 24 hours earlier.

Multiple sources decried the stalemate, alleging that the governor is embarrassing himself, the emirate and Kaduna State.

“It is unprecedented that a governor would refuse to select from shortlisted names four days after kingmakers’ submission. What or who is he afraid of?”, he quipped rhetorically.

Reminded of the state government’s statement that security agencies will carry out “necessary checks” on the top three, the source exploded.

“Rubbish!”, he fumed. “They wouldn’t have said that if El-Rufai’s choice made the final cut. The names of three princes are before him, let him pick one and stop this game so we will all move on.”

On Tuesday, it was gathered that El-Rufai was at the State House in Abuja, Nigeria’s capital, on Sunday.

He had a meeting with President Muhammadu Buhari and the Emir of Zazzau matter was discussed.

Another source said El-Rufai “was asked to do the right thing as stated by the law.”

“The general opinion is that he is thinking about how to change the kingmakers’ decision. The selection took place in front of the delegates he sent. The SSG, commissioners, and others. They actually laid out the voting rules”, he remarked.

“He is trying to appoint someone not on the list submitted. This would be similar to what occurred in the May 2013 election of the Nigeria Governors Forum Chairman, where the federal government tried to deny Rotimi Amaechi (ex-Rivers Governor) the position after scoring 19 votes against the 16 of Jonah Jang (ex-Plateau Governor).”

Meanwhile, the prince El-Rufai wants as the new Emir has been identified.

He is Ahmad Nuhu Bamalli, the immediate past Nigerian Ambassador to Thailand.

Bamalli, who was recalled about three months ago, is an ally of the dethroned Emir of Kano, Muhammadu Sanusi.

Interestingly, the Magajin Garin Zazzau was among the eight the kingmakers dropped during screening.

A prominent Kaduna personality wondered why the governor is “scheming” to abandon the outcome.

The source hinted that the former Minister of the Federal Capital Territory (FCT) and the five senior emirate officials have been on good terms.

He said: “The kingmakers have agreed with El-Rufai’s policies since he assumed power in 2015. Ibrahim Aminu (Waziri Zazzau) and Umar Muhammad (Fagacin Zazzau) were employed by the state government as Chairman of Local Government Affairs and the Principal of Commercial Secondary School, respectively.

“The appointment of Muhammad Abbas (Makama Ƙarami) last August was authorised and expedited by the governor, as the law required both him and the Emir to be on the same page. The governor sees him as a capable associate.

“Dalhatu Ƙasimu (Limamin Juma’a) and Muhammad Aliyu (Limamin Kona), supported El-Rufai in 2015 and 2019 elections. The governor won about 90% of the votes in their wards. We are surprised he is disagreeing with them now. What is certain is that the appointment of a new Emir outside those submitted will lead to court cases.”