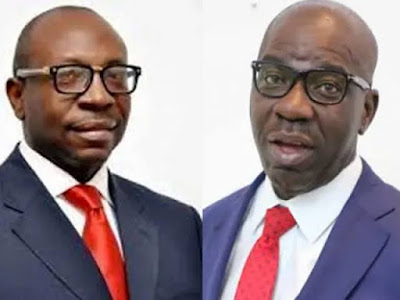 The All Progressive Congress (APC) youth leaders in Ewu, Esan Central Local Government Area of Edo State, have said they narrowly escaped death, claiming to have been attacked by thugs allegedly hired by the Peoples Democratic Party, PDP.

The party accused the chairman of Esan LGA, Hon Waziri Edokpa of orchestrating the attack while youths were pasting posters of the APC candidate Pastor Osagie Ize-Iyamu in the community in preparation for the ward to ward rally.

Leader, Ewu youth APC Campaign Council and former Special Adviser to the Council Chairman, Hon Clement Inegben, alleged that around 8pm on Friday, he was summoned to appear at Ewu Police Station only to be attacked as he got to the Station.

Another youth, identified as Aguni, said they were installing mini billboards when PDP loyalists descended on them with dangerous weapons. He asked authorities and the public to rescue them from the Council Chairman, who he claimed had formed the habit of harassing those who have refused to accompany him to PDP.

Meanwhile, reacting to the development, Ize-Iyamu enjoined the youths to maintain their peaceful disposition, which they had adopted from the beginning of the Campaign.

He, however, expressed disappointment that after the Oba of Benin, Oba Ewuare II, had extracted commitments from leaders of all political groups and other stakeholders to maintain peace throughout the period of the election, the PDP still stuck to the use of violence.

Other APC Leaders in Ewu, including a former Speaker of Edo State House of Assembly, Rt Hon David Iyoha and a former commissioner, Hon Larry Aghedo, prevailed on the youths to stick nobly to peace and tranquillity.