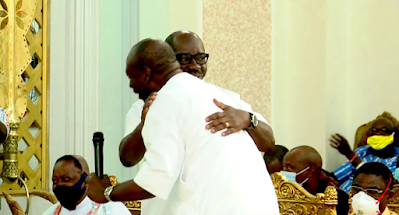 The governorship candidate of the All Progressives Congress, APC, in Edo State, Pastor Osagie Ize-Iyamu, has described the incumbent Governor, Godwin Obaseki, as his senior brother.

Ize-Iyamu stated this as he moved closer to embrace Governor Obaseki during the peace meeting at the palace of Oba Ewuare II, in Benin, on Wednesday.

He said it would be wrong for anyone to describe the September 19 governorship election as a ‘do-or-die’ affair, adding that it is a family election.

He said there won’t be violence from the side of the APC supporters because they would be warned against engaging in such.

“I want to assure our father and all those present here that we on our part pledged to ensure that our supporters conduct themselves peacefully throughout the campaign and during the election.

“And every campaign we do henceforth we’re going to take some time to talk to them to keep to the peace no matter what provocation they might talk about to ensure that there’s no violence.

“This election is a family one and it cannot be described as a do or die affair. We want to give them that assurance.

“I wanted to mention other one or two things but to respect what our father has said, let’s leave it at that. We want to assure His Majesty that we will not go against your advice.

“And I am going to shake or embrace His Excellency, Governor Obaseki, he is my serious brother I’ll gladly move to him and embrace him,” he said.