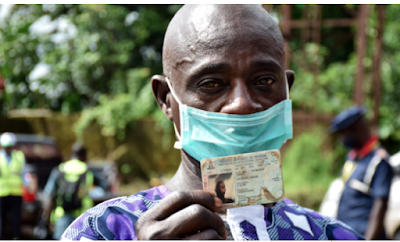 A night before the Edo governorship election, something quite disturbing happened. Reports of the police siege on the hotel where Nyesom Wike, governor of Rivers, lodged in Benin, Edo state capital, sent a wrong signal across. Wike, who was chairman of the Peoples Democratic Party (PDP) national campaign council for the election, was said to have been restricted to the hotel by the police.

The incident triggered different reactions and also raised a lot of questions: what was the business of the police at the hotel? Why during the election eve? Could that be part of a bigger plan to tamper with the election? Should the PDP rise and “defend” their people? The tension was brewing quite fast.

Commenting on the situation when he appeared on Channels Television later, the governor said Mohammed Adamu, inspector-general of police, asked him to leave Edo.


“As the chairman of the National Campaign Council (of the PDP), I came in here with some of my colleagues; I was in the hotel. Around 2 o’clock in the afternoon, the IG (inspector general of police) called,” he had said.

“I think they called my orderly; I don’t know how they got his number and then I spoke with the IG and he said I must leave Edo State. I said ‘for what?’ He said because my being here may cause a crisis. I said how will it cause crisis? He said because I made a statement that is inflammatory. I said ‘which statement did I make? That we should be extra vigilant? That people should protect their votes?’ So, ‘what is the inflammatory statement I made?’

Wike later went about his duty without any harassment. But what many did not know is the role played by President Muhammadu Buhari. TheCable reports that the president called Tukur Buratai, chief of army staff, and the IGP, warning them sternly not “intervene” in the election.

Were it not for the president’s intervention, perhaps we could have witnessed a replay of what transpired in Rivers during last year’s election where soldiers interfered in the electoral process; or in Kogi state where armed security operatives stormed the hotel accommodating of some members of the opposition on the eve of the governorship election.

In addition to Buhari, we name some other actors who played a key role in the successful conduct of the election which.

THE US, UK AND EU


Five days to the election, the United States sent a strong signal to politicians and other actors in the electoral process when it announced a visa ban on those that reportedly tampered with recent elections in Nigeria.

In addition to placing such restrictions on the individuals indicted in the Kogi and Bayelsa states elections, the US also said the measure will be extended to anyone who works against a free and fair poll in Edo.

Barely 24 hours after the restrictions were announced, the United Kingdom and the European Union took a decisive stance as well, threatening to place visa restrictions and seize UK-based assets of individuals that perpetrate violence during the elections.

The steps by the two countries could have contributed to a successful poll in Edo. While some politicians can afford such travel restrictions, losing their assets must have come as a nightmare.


Mahmood Yakubu, chairman of the Independent National Electoral Commission (INEC), was also one of the heroes in the Edo poll. While the commission is expected to always be its best in conducting elections across the country, Saturday’s election, like observers noted, was an improvement on what obtained in previous elections.

The INEC chairman never minced words on how determined the commission was to ensure the wish of the people reflected in the final outcome of the governorship election in Edo, constantly reminding the staff of the need for fairness even till the 11th hour.

Yakubu also introduced far-reaching measures that turned out to be the game-changer, such as the policy to withdraw from any polling unit that turns violent and refusal to recognise any winner where the electoral officials were forced to declare one.

Days to the election, the committee got the governorship candidates to sign a peace pact, signalling that election no be war. The agreement came on the heels of numerous reports about signs of impending violence.

Although it has become a ritual as with previous elections, one cannot underestimate the impact of such measures, especially among political party officials who often threaten fire and brimstone during campaigns.

No wonder Mathew Kukah, one of the conveners of the peace committee, said when the pact was signed last week that the action was not a mere ceremony but a vow being taken by the candidates to signify that they remain committed to peace even while seeking the spot at the polls.


The efforts of journalists and observers who risked everything to connect the eyes and ears of the world to the election as it unfolded must not go unnoticed.

As is now the sad reality of Nigeria’s elections, journalists and observers in parts of Edo were harassed and threatened on Saturday. But, like the true heroes they are, this never deterred them from effectively carrying out their responsibilities.

For instance, while two journalists were attacked and forced to delete the pictures they took of vote-buying at ward 10 in Etsako west local government, observers, including those from the Centre for Democracy and Development (CDD) were arrested and detained for no known offence in Esan central local government.

Security agencies also contributed their own quota to the successful outcome of the election.

AND, ABOVE ALL, THE VOTERS!

But given the high stakes, tension, threat of violence, heavy rainfall and the COVID-19 pandemic, the voters deserve every accolade for still coming out to vote.

Before election day, there had been pockets of violence on campaign trail, with scary videos circulating about  cultists being armed and given the marching order.

The election went relatively smoothly, all considered, and those who came out to case their vote deserve to be celebrated as well.