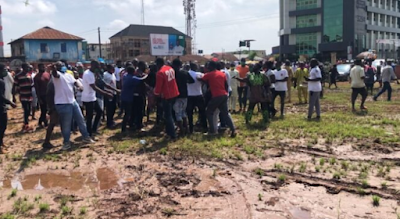 There is currently tension at polling unit 19, ward 04, Oredo local government area of Edo, where Godwin Obaseki, governor of the state, is expected to vote.

Supporters of the Peoples Democratic Party (PDP) and the All Progressives Congress (APC) attacked each other shortly after the governor arrived at his polling unit.

Obaseki, candidate of the PDP, is up against Osagie Ize-Iyamu of the APC in the election.

Trouble started after a PDP youth leader simply identified as Jimoh hit a supporter of another party.

From his position in the queue, the governor monitored the proceeding.

Obaseki had not cast his ballot as of the time of filing this report.