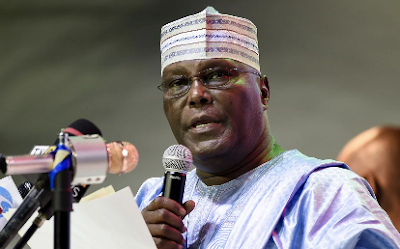 The former presidential candidate of the Peoples Democratic Party, PDP, Atiku Abubakar, has condemned the attack on the convoy of Borno State Governor, Babagana Zulum, in which several persons were feared dead and others injured.

It was gathered that twelve policemen, 13 civilians and five soldiers were confirmed dead from the attack.

The incident occurred around 2pm on Friday, while the convoy was heading to Baga town ahead of the government’s plan to return Internally Displaced Persons (IDPs) from Maiduguri to Baga.

The terrorists also seized and carted away one armoured police car, one gun truck belonging to the military and six government vehicles.

Reacting, Atiku, in a tweet via his official Twitter handle on Saturday, said the attack is yet another reminder that Nigeria needs to adopt new strategies to deal with the menace of insurgency decisively.

He also sympathized with the families of the deceased and the people of Borno.

Atiku wrote: “The attack on Gov. Babagana Zulum in which over a dozen security operatives were killed between Monguno and Baga should be a source of concern not only because it is the second time such an attack is taking place in recent times, but because the Borno governor is not a soft target.

“This attack is yet another reminder that we need to adopt new strategies to deal with the menace of insurgency decisively. I convey my condolences to the families of the deceased.

“I solidarise with the government and people of Borno that Gov Zulum did not come to any harm.”