BBNaija 2020: Winner of season 5 has been predetermined – Kiddwaya tells Ozo 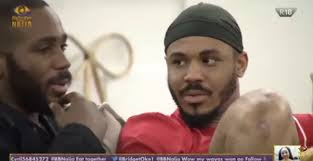 Big Brother Naija, BBNaija housemate Kiddwaya on Tuesday said the winner of season 5 has been predetermined.

Kiddwaya said this while having a conversation with Ozo about the final.

Ozo had expressed concern about his nomination for eviction this Sunday and hoped that he would make it to the final week.

Kiddwaya advising him, said he believes in fate and is not worried because he knows that the winner of this year has been predetermined.

“For me being in the final week is better than spending 9 weeks here.

“I believe in fate and I know that whoever is going to win is already pre-determined,” he said.