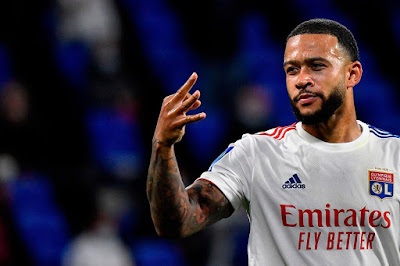 This was revealed by respected Italian sports journalist, Fabrizio Romano, via his Twitter handle on Wednesday afternoon.

Romano tweeted,” Memphis Depay have agreed on personal terms with Barcelona after contacts started days ago.

“But the final agreement is still to be reached between Barça and OL – talks ongoing.”

Recall recalls that Depay had been linked with a move to Barcelona in the past few days.

The 26-year-old tops Barcelona’s list of players that will replace Luis Suarez when the former Liverpool hitman eventually leaves the Camp Nou.

Speaking about the possibility of him leaving Lyon this summer, Depay said last month: “I do not see the future, I do not know if I’ll do the full season here. I’ve been here for four years, and I became a captain.

“After you’ve to look at your career, there is no Champions League. At the moment, I do not know.”