Bale accuses Real Madrid of not allowing him to leave 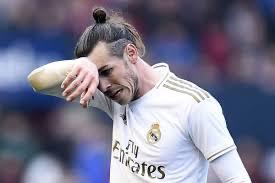 Real Madrid forward, Gareth Bale, has accused the club of not allowing him to leave Santiago Bernabeu.

He also said that it was nice for him to feel appreciated when he joins up with the Wales national team.

Bale almost left Real Madrid last summer for a move to China, but it was blocked at the last minute.

“I have tried to leave Real Madrid. The club makes things very difficult. I’m under contract, so it is in the club’s hands.

“I tried to leave last year, but they blocked everything at the last second. It was a project I was excited for, but it did not materialise.

“I’m only 31 still, but I feel I’m in great shape still and feel like I have a lot to give. We will see what happens. It is in the club’s hands, but they make things very difficult, to be honest.”

Bale joined Real Madrid from Tottenham Hotspur in 2013 for a then world-record fee of £86million.

The winger’s time in Real Madrid has not gone as planned, as he has been frozen out by head coach, Zinedine Zidane.

He made just 20 appearances for the La Liga champions last season and only two of those came after football’s restart following COVID-19 lockdown.

Bale has two years left on his current contract with Real Madrid.