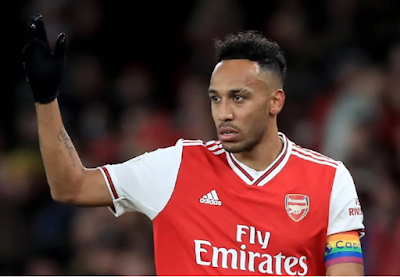 Arsenal captain, Pierre-Emerick Aubameyang, has congratulated former team-mate, Henrikh Mkhitaryan after the Armenian’s contract was terminated by the Gunners on Monday.

Recall that Arsenal on Monday, announced they had terminated Mkhitaryan’s contract, two days after they defeated Liverpool in the Community Shield.

Mkhitaryan has now signed for AS Roma in the Serie A on a permanent basis.

The former Manchester United star spent the 2019/2020 season on loan at Roma.

An official club statement from Arsenal read: “Micki leaves us following his season-long loan in Italy.

“We have agreed to terminate his contract with us by mutual consent to allow him to join Roma in a permanent move.”

“Wish you the best mon frero [my brother],” Aubameyang wrote.

The Gabonese striker then followed it up with ‘felicitations’, meaning ‘congratulations’.