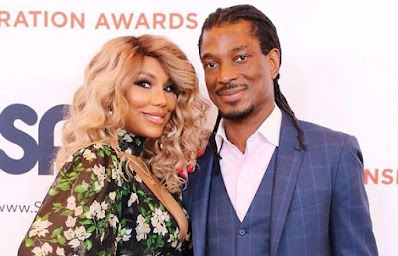 Blast quoted sources close to Braxton as saying that the duo had a heated exchange while the ‘Braxton Family Values’ star was driving into a mental health facility for treatment.

The former host of ‘The Real’ was said to have tackled Adefeso over his recent Instagram post which featured Logan Herbert, her 7-year-old son.

The issue had degenerated into an intense argument between them with Braxton telling Adefeso that he was “around for the wrong reasons and could not be trusted.”

Braxton claimed that her boyfriend had become “irate threatening not only her life but his own.”

The television personality also alleged that Adefeso said that they were going to end up in a “murder-suicide.”

In the ensuing drama, Braxton said Adefeso had “grabbed her hard” on the arms, which caused her bruise as the situation became more violent.

The actress denied engaging him during the scuffle, claiming that she only grabbed onto him after he got physical.

Her claim is coming about 24 hours after Adefeso filed for a domestic violence restraining order against her before a Los Angeles county court.