All is not well with Nigeria – 94-year-old Pa Fasoranti 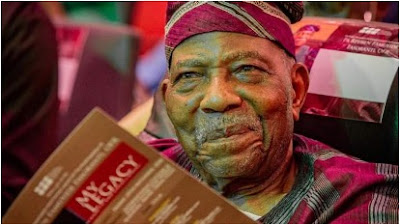 The Leader of the pan-Yoruba socio-cultural group, Afenifere, Pa Rueben Fasoranti, on Friday, stated that the current status of the country is not the Nigeria of his dreams.

Pa Fasoranti, who expressed concern over the state of the country, emphasized that the issue of insecurity has continued to rear its ugly head as well as the menace of unemployment pervading the country with no solution in sight from those in authority.

The Afenifere leader stated this during the occasion of his 94th birthday held in Akure, Ondo State capital where his autobiography entitled “My Life, My Legacy (Service with Integrity and Excellence) was also unveiled.

Speaking at the event, which was attended by people across all walks of life, including former President Olusegun Obasanjo, Governor Oluwarotimi Akeredolu of Ondo State, his Ekiti State counterpart, Kayode Fayemi, the nonagenarian said at 94 years “I am still here with you because of the grace of God and even though as an individual I am fulfilled, I regret to say that all is not well with the country.

“No thanks to the insecurity of life and property, worsening unemployment of abIe-bodied citizens leading to all manners of crimes, threatening famine which is a conspiracy between mother nature and the ravaging of the land by ever-surging marauders and so on.”

Pa Fasoranti also disclosed that he has decided to establish a democratic institute as part of plans to inculcate and entrench desired political values and discipline to practicing and aspiring democrats which he said was part of his dream to have an enduring legacy.

“Time is no longer my friend, though, but with you, great and understanding people, time can still be bought to get the project accomplished before my time is finally out.

“In my life adventures, l have tried to see what I could leave behind for humanity. To this extent, I have tried to invest in human beings.”

Describing Fasoranti as a special gift to the Yorubaland and Nigeria as a whole, former President Olusegun Obasanjo, who was the chairman on the occasion, said the Afenifere leader had been expressing fear of how Nigeria would be when he passed on.

However, Obasanjo allayed the fear of the Afenifere leader, saying Nigeria would be better before his exit from the stage.