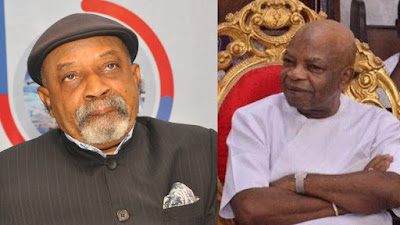 Billionaire oil mogul and philanthropist, Prince Arthur Eze has ordered his media aides to cease replying to remarks by the Minister of Labour and Employment, Dr Chris Ngige against his person.

Ngige and Eze have recently engaged each other in a media war, after the latter took 12 monarchs from Anambra, including the traditional rulers of Alor community where Ngige hails from; Igwe MacAnthony Okonkwo to Abuja to meet President Muhammadu Buhari.

The monarchs had immediately been suspended by Anambra State Governor, Chief Willie Obiano for a period of one year, but Dr Ngige proposed that they be banished from their communities, while Eze who took them on the ill-fated trip be punished too.

Though Eze had replied Ngige’s call that he be punished, leading Ngige to launch more attacks, but on Wednesday, he (Eze) instructed his aides to ignore Ngige.

In a press statement made available by Eze’s media directorate, and signed by the billionaire oil mogul himself, he said he does not expect respect from Ngige, who had once disrespected his own father by dragging him to court.

“I have instructed my Media Directorate not to further reply or dignify the tirades of Mr. Chris Nwabueze Ngige, Nigeria’s most unfortunate and accidental minister with a reply or response.

“For I should not expect respect from he who once dragged his biological father to court. I think his irresponsible behaviour both to the National Assembly, his Alor community and the public as a minister are genetic as he also lacks social comportment and public decorum,” the statement read.

The 12 monarchs who accompanied Eze on the trip have long apologized to the Anambra State governor, stating that they erred by traveling out of their domain, without obtaining his permission.