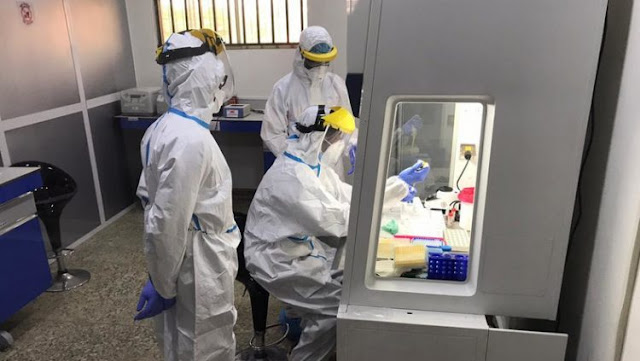 Presidential Task Force on COVID-19 on Tuesday justified the repeat COVID-19 test being conducted on international travellers after seven days of their arrival to the country.

The National Coordinator of the PTF, Dr Sani Aliyu, said at the taskforce’s briefing in Abuja that a significant number of 80 out of the 2,403 tests carried out when the exercise began turned out to be positive.

He said this was despite the fact that the travelers who tested positive arrived in the country with a negative PCR test.

“Of the 2,403 passengers that were tested in Lagos when we started the exercise, 80 were positive. Meanwhile, they had negative COVID-19 PCR test,” he said.

He said the repeat test would have been unnecessary if the country had “a system of enforcement of isolation such that everybody coming into the country self-isolated effectively for two weeks.”

Aliyu also warned foreign travelers to pay to only laboratories on the travel portal of the government for their repeat tests.

Aliyu said, “No Federal Government agency is receiving these funds. The negotiation for the cost is between the state governments and the private labs themselves.

“The charges range between N35,600 for the Kano portal which we are just about to operationalise to N50,400 for Lagos.”

Also, at the briefing, the Federal Government on Tuesday raised fears about a possible surge in the number of COVID-19 cases unless there would be a scale-up surveillance and review of its response plan to integrate new ways to deal with the disease.

The government, however, said the number of active cases had continued to drop as it revised the discharge criteria in line with new knowledge of the disease.

The Minister of Health, Dr Osagie Ehanire, said, “As business and schools begin to open and as travels begin to pick up, we fear that we may have a surge in the number of cases unless we scale up surveillance and review our response plan to integrate new ways to deal with the disease.”

The minister also appealed to state governments “to continue to ensure that we step up case findings, sample collection and testing.

“Sadly, the number of deaths as a result of the disease has since crossed the 1,100 mark with 1,111 deaths recorded in 36 states and the Federal Capital Territory..”

Meanwhile, the Secretary to the Government of the Federation and Chairman of PTF, Boss Mustapha, said Nigeria would be among the beneficiaries as the World Health Organisation prepared to roll out 120 million effective rapid test tools capable of providing reliable results in 30 minutes rather than in hours.

Mustapha said, “Developments with testing around the world have been very encouraging as technology improves. We were pleased to receive the news of the partnership driven by the WHO to roll out 120 million effective rapid test tools capable of providing reliable results in 30 minutes rather than hours.

“It will help to reach distant communities where laboratories are not located and will help in cutting down the response time that medical personnel need to commence treatment.”