2023 Presidency: I will campaign for Tinubu – Buhari 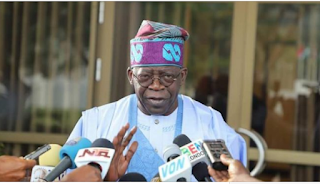 The general view is that Bola Tinubu, former Lagos state governor and All Progressives Congress (APC) leader, will run for Presidency in 2023 but he has not announced any such intentions.

In fact, a few months ago he mocked those pundits who purported to know his political intentions.

Responding to the pundits, Tinubu said: “Already you have assigned colourful epitaphs to the 2023 death of an alleged political ambition that is not yet even born.”

However, his loyalists have continued to throw their weight behind him for the 2023 presidency.

One of them, Oyo North lawmaker Senator Abdulfatai Buhari, in a recent interview with journalist Edmund Obilo, stated that he will support Tinubu for the country’s top seat once he declares his intentions.

Buhari also reacted to the insinuations that Governor Kayode Fayemi of Ekiti State was working against Tinubu’s interest.

“No. I am for Tinubu. I am not for Fayemi and I will not be in a meeting where somebody would be working against Tinubu. I am supporting Tinubu,” Buhari stated.

Responding to a question on whether Tinubu was running for president, Buhari said, “If he wants to be President, I will support him. I will campaign for him.”

Buhari also spoke on the crisis rocking the APC in Oyo State.

The lawmaker noted that the disagreement was caused by the loss of the governorship seat to the Peoples Democratic Party.

He, however, said former Governor of Oyo State, Adebayo Alao-Akala, is the leader of the party in the state and he is working perfectly to make the party better.