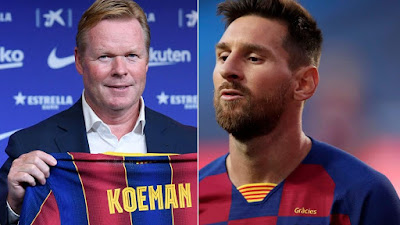 Lionel Messi decided to hand in a transfer request at Barcelona, after the new manager Ronald Koeman told him “your privileges in the squad are over”.

Koeman replaced Quique Setien as manager, following a humiliating 8-2 defeat to Bayern Munich in the quarter-finals of the Champions League.

The Dutchman quickly arranged a meeting with Messi, to discuss his plans for the team moving forward.

During the chat, Messi told Koeman that he saw himself “more out of the club than in it”.

Argentine news outlet Diario Olé claims Koeman replied Messi: “Your privileges in the squad are over, you have to do everything for the team.

“I’m going to be inflexible, you have to think about the team.”

The candid conversation reportedly convinced Messi that now is the time for him to quit the club.