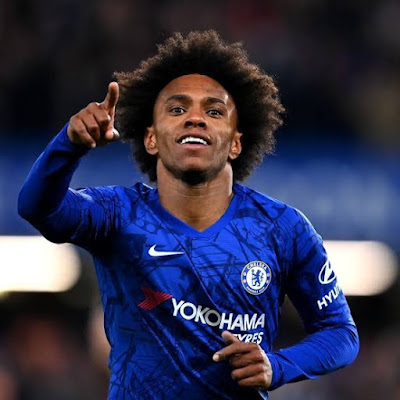 Willian Borges da Silva has rejected Chelsea’s attempt to persuade him to sign a new two-year deal and is in reportedly in talks with Arsenal.

The winger has been unable to reach agreement with Chelsea over fresh terms because of his demands for a three-year extension and is increasingly likely to leave after the second leg of the last-16 Champions League tie against Bayern Munich on Saturday.

Although Willian is expected to delay a decision on his future until after that game, the chances of a breakthrough in negotiations with Chelsea are receding, boosting Arsenal’s hopes of signing the 31-year-old.

Chelsea coach, Frank Lampard has repeatedly said he wants to keep Willian, even though the club have strengthened their attack with the signings of Timo Werner and Hakim Ziyech and remain in talks with Bayer Leverkusen over Kai Havertz.

However Chelsea’s board do not want to hand a three-year deal to the Brazil international, who missed his side’s defeat by Arsenal in the FA Cup final with an achilles injury.

Willian is settled in London and has been targeted by Arsenal, who are willing to offer a three-year deal.