What happened at Edo assembly was attempted coup d’etat -Obaseki 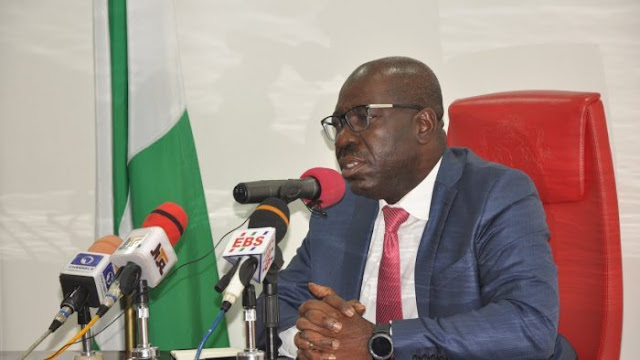 Godwin Obaseki, governor of Edo, has described the recent events at the state house of assembly as a failed coup.

The governor accused Adams Oshiomhole, his predecessor, of being “bent on throwing the state into crisis” ahead of the September 19 governorship election.

The assembly complex has been under police siege as the rancour between lawmakers loyal to the governor and those with the backing of Oshiomhole worsens.

On Thursday, some pro-Oshiomhole lawmakers whose seats had been declared vacant, were sworn in at an undisclosed location after which they elected a new speaker.

In a state broadcast on Friday, Obaseki said the attempt to invade the assembly complex “had all the hallmarks of an attempted coup d’état,” adding that his administration will do whatever it takes to defend the rule of law.

He added that the purported inauguration of the lawmakers was an “illegal assault on our democracy”.

“Any person or group of persons who set out to test our will in this regard will meet with the full wrath of the law,” the governor said.

“The people of Edo State rose as one to prevent the desecration of our democracy. It is however worrisome that certain persons are willing to plunge the society into avoidable anarchy and conflict just to satisfy their illegitimate objectives.

“This unfortunate situation has festered because a former governor of the state is bent on throwing the state into crisis ahead of the forthcoming governorship elections.”

Obaseki said the action of the lawmakers on Thursday is “tantamount to treason,” adding: “This government will take all steps necessary to defend the rule of law and democratic ideals”.