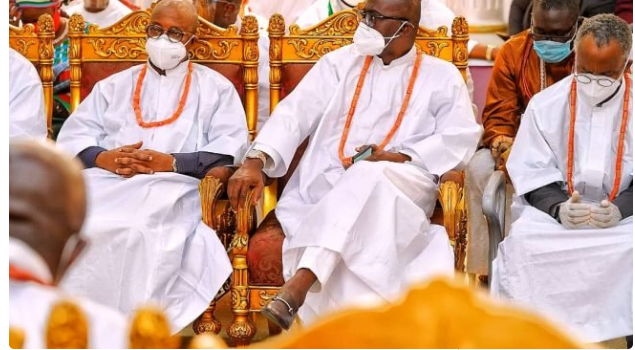 Governors on the platform of the All Progressives Congress (APC) were in Benin, Edo capital, on Saturday, to launch the campaign for the September 19 governorship election in the state.

The governors at the event include Abdullahi Ganduje of Kano, Dapo Abiodun of Ogun, Gboyega Oyetola of Osun, Babajide Sanwo-Olu of Lagos, Abubakar Bello of Niger, and Rotimi Akeredolu of Ondo.

Mala Buni, while unveiling Osagie Ize-Iyamu as the party’s candidate, told supporters at the event that the governors had come to reclaim the state for the APC.

“We are in Edo State to take back our state,” Mala Buni said.

“Four years ago, we were here and you voted for the APC and we know that you will do it again. We urge you not to be violent because victory is ours and we are here to win.”

Adams Oshiomhole, former national chairman of the party, said Ize-Iyamu will build a government that will impact on the poor and lift them to a level of dignity.