We will form our own security outfit in North – IPOB 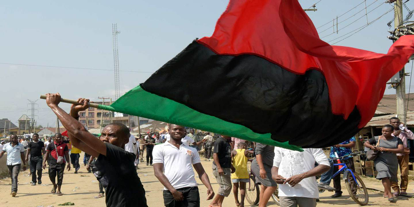 Nnamdi Kanu, leader of the Indigenous People of Biafra, IPOB, has threatened to form a security outfit in the Northern part of the country.

In a statement he signed, the IPOB leader again reiterated that the Miyetti Allah security outfit would be expelled from the Southeast.

He said: “Given the overwhelming evidence that the Fulanized Federal Government has given its tacit blessing to Miyetti Allah to proceed with this sinister move, the IPOB has resolved to take the following immediate steps:

“The IPOB will, henceforth, regard as a hostile and occupying force any Fulani poses, whether deceptively called a security outfit or vigilante found anywhere in Biafraland. Accordingly, the IPOB will take appropriate measures to expel such force, measure for measure.

“If the Fulani Federal Government attempts to assist or otherwise enable Miyetti Allah to stay put in Biafraland, the IPOB will escalate its response to include but not limited to equally forming counter-security outfits in all states of the far North where the Fulani are predominant.”