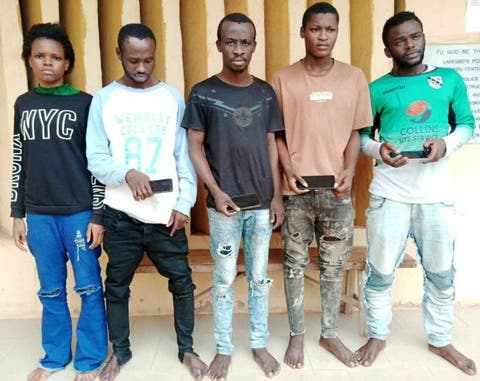 Operatives of the Zone 2 Police Command, Onikan, Lagos, have arrested five suspected members of a syndicate which specialized in stealing mobile phones to withdraw money from owners’ accounts.

The suspects boasted that they did not need an insider connection in banks to transfer money from stolen SIM cards. Rather, they claimed they had codes which could facilitate the change of owners withdrawal pins.

The suspects’ modus operandi included visiting hair salons in high brow areas in Lagos, pretending to have come to either plait, wash or have their hair cut, only to snatch phones that are carelessly placed by genuine customers.

They had stolen a Samsung X9 phone in a barbing saloon, in Lekki area of Lagos, two months ago, from where they successfully withdrew N2.3 million.

During interrogation, one of them, Asigbe, said “ I stole the phone and gave the SIM card to Ikechukwu, who got the owner’s BVN. He sent the BVN number to Yele( at large), who generated the account owner’s transfer pin. He gave Ikechukwu the details. He ( Ikechukwu) transferred N2.3 million from the account, into Seun’s account. He also bought N20,000 worth of airtime from the account. We don’t have a bank insider, we bypass them because we get all the information we need to transfer money from stolen phones through some codes”.

The Zonal Police Public Relations Officer, DSP Hauwa Adamu, informed that as at the time of arrest, one of the suspects, Seun, had given his Auto Teller Machine card to Opara, apparently for another deal.

She said: “Investigation is in progress as suspects will be charged to court upon completion, for prosecution. Meanwhile, members of the public are hereby advised to quickly draw necessary attention in the event of loss of their mobile phones or other valuables”.