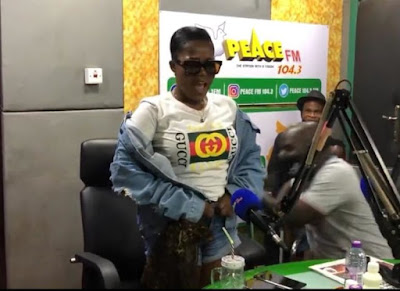 A video has surfaced online wherein Belinda Amoah, a Ghanaian vocalist and songwriter, nearly showed off her pubic hair as proof she’s not growing grey hair due to old age.

The 40-year-old, who is better known as Mzbel, appeared on a Peace FM radio programme, where she addressed comments which trailed her feud and verbal exchange with Tracey Boakye, an actress.

While speaking about aging, MzBel dismissed claims she has grey hair all over her private part.

She thereafter untied her scarf to show her hair was black. MzBel then made for the zippers of her bum shorts before she was asked to stop by some members of the panel.

Tracey had earlier claimed a married man had ditched MzBel to come for her and that the latter is attempting to tarnish her image because the unnamed man gifted her more properties than MzBel.

“He said it is out of a mistake that he slept with you so I should forgive him,” Tracey alleged as Mzbel fired back, claiming that the unidentified man shunned Tracey and that she was only blaming her.

“If you’re chopping him and others are too, you don’t publicly fight over him, you chop and keep quiet… They claim their success is out of handwork but it’s from somebody’s husband,” Mzbel said.

Mzbel, who rose to fame after releasing a song titled ‘Sixteen Years’, is known for her controversial traits and kind of music.