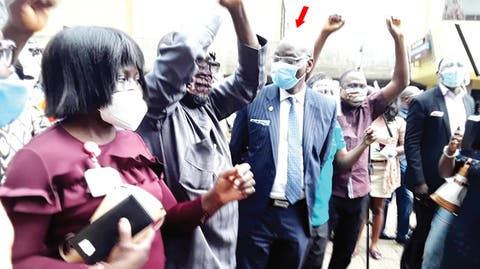 Some representatives of the Senate of the University of Lagos on Friday visited the President Muhammadu Buhari to seek his intervention in what they described as the illegal removal of the varsity’s Vice-Chancellor, Prof Oluwatoyin Ogundipe.

The UNILAG Senate members, who were led by their chairman, Prof Chioma Agomo, also visited the Minister of Education, Adamu Adamu, but were reported to have met the Minister of State for Education.

Agomo, while briefing the press after the meeting, said though they did not meet the President, they dropped a letter of the resolution of the Senate.

She said Ogundipe’s sacking without due process was a dangerous precedent for the university system in Nigeria.

She said, “We are here on behalf of the Senate of the University of Lagos. We came to the Villa because the President of the Federal Republic of Nigeria is a visitor to the university, so we thought we should pay a courtesy call to the Villa because we had gone to the appropriate authorities to give them the resolution of the Senate concerning the event that is unfolding on the university.

“On August 13, we had an emergency meeting, attended by 91 professors. What was the issue? We want to make it known that the purported removal of the Vice-Chancellor of the University of Lagos did not follow due process. Therefore, it is illegal and cannot stand. We are not saying that the council has no right to remove the vice-chancellor.

“There is a laid-down procedure in the extant laws of the Federal Republic of Nigeria. The law provides the procedure for the removal of the vice-chancellor that there should be a joint committee of the Senate and the Governing Council. This has not been followed. The rule of law has been trampled on the ground. We are talking about the life and soul of the rule of law, of fairness and justice, not just for the University of Lagos, but for the entire university system and indeed the entire nation.

“We are not saying our vice-chancellor has or has not committed any offence. Binding allegations here and there is begging the issue. The issue is, if you say he has done something wrong, follow due process. And if he is found guilty, so be it.”

Agomo added that the Pro-Chancellor and Chairman of the Governing Council of UNILAG, Dr Wale Babalakin, had lost the confidence of the Senate and that the council should be dissolved.

However, Babalakin on Friday defended Ogundipe’s sacking, accusing him of looting the university’s treasury “recklessly.”

He stated this on Friday at the MMA2 on his arrival in Lagos from Abuja, where the school’s governing council had been in a three-day meeting.

The UNILAG governing council had on August 12, the first day of its meeting, announced Ogundipe’s sacking and appointed Prof Theophilus Soyombo as the new vice-chancellor.

Speaking on Friday, Babalakin said, “Without mentioning to anybody, Ogundipe spent N49m renovating his official house; he sought no approval for this. To cover it up, he gave the bursar N41m to renovate his official residence. An investigation found out that he exceeded his authority. He was paying security vote to the Dean of Students’ Affairs without anyone authorising it.”

He also criticised Ogundipe’s style of confronting his employers (the governing council) with legal action over his removal.

Meanwhile, the Committee of Vice-Chancellors of Universities in Nigeria on Friday faulted Ogundipe’s sacking, saying it didn’t follow due process.

While calling on the UNILAG governing council to follow due process in Ogundipe’s removal, the organisation said the embattled vice-chancellor should be given an opportunity to defend himself.

The Senior Staff Association of Nigerian Universities on Friday distanced itself from the solidarity protest by its acting Chairman of UNILAG chapter, Olusola Sowunmi, on Ogundipe’s sacking.

Sowunmi was said to have participated in the joint meeting of UNILAG-based unions, including the Academic Staff Union of Universities in the condemnation of the removal of Ogundipe by the Babalakin-led governing council, describing it as “unjust, ungodly and illegal.”

But the UNILAG SSANU executive, in a statement by its acting Secretary, Feyisetan Olaoluwa, condemned Sowunmi for joining in the protest, saying that the entire scenario was political.

Meanwhile, the newly appointed acting Vice Chancellor of the university, Prof Omololu Soyombo, has said his appointment is a call to service with the overall objective of fostering an atmosphere of peace in the university.

A statement signed by Shoyombo noted that it was a position of responsibility that was entrusted upon him which he accepted out of a sense of duty to the University.

In the statement  titled, “Press release by Prof Omololu Soyombo: acting Vice Chancellor, University of Lagos,” he said, “I wish to start by noting that this is a position of responsibility that was thrust upon me and which I accepted out of a sense of duty to our University. I see this as a call to service with the overall objective of fostering an atmosphere of peace for the normal university business of teaching, research and community service.”