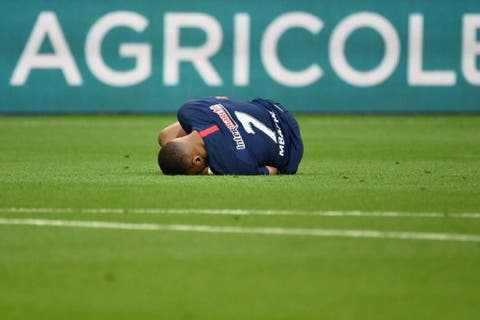 Kylian Mbappe will meet with Paris Saint Germain’s medical team before a decision is made on whether he will be on the bench to face Atalanta in the Champions League, says Thomas Tuchel.
The France superstar suffered a serious ankle sprain in PSG’s 1-0 Coupe de France final victory over Saint-Etienne last month and scans ruled him out for around three weeks, seemingly confirming his absence against Atalanta.
Head coach Tuchel later said Mbappe needs “a miracle” to play in the quarter-final, which will take place in Lisbon next Wednesday, while the World Cup winner sat out the Coupe de la Ligue final versus Lyon.
Tuchel was again asked about Mbappe’s availability prior to PSG’s friendly against Sochaux on Wednesday and was unable to provide a definitive answer when asked if he will feature against the Serie A side.
“For Mbappe, I have no idea,” he told beIN SPORTS.
“He works hard, but he’s short, super short. We will see on Saturday with the doctor whether it is possible that he is on the bench against Atalanta.”