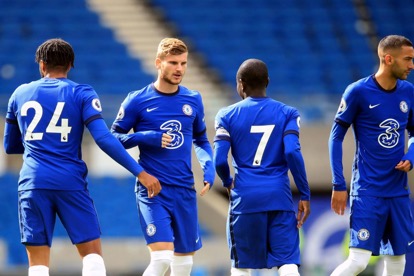 Timo Werner scored a goal in the first four minutes as a Chelsea player, as they played a 1-1 draw against Brighton in a friendly match on Saturday evening.

Werner scored Chelsea’s only goal of the encounter at the Falmer Stadium.

Hakim Ziyech’s cross located the run of Callum Hudson-Odoi and although the winger’s touch landed rather accidentally into Werner’s path and the Germany international slotted it into the back of the net.

Brighton, however, scored a late penalty goal through Pascal Grob to equalize against Frank Lampard’s men.

Werner joined Chelsea from RB Leipzig this summer after Liverpool decided to pull out of the race for the 24-year-old.

The striker moved to Stamford Bridge for £48 million.

“I am very excited. I can’t wait. I was training on my own for a while when I first signed, but I have been working with the whole team over the past week or so, and it has been great,” Werner said in June after officially completing his move to Chelsea.