Stop meeting in Enugu, we will retaliate — IPOB speaks tough 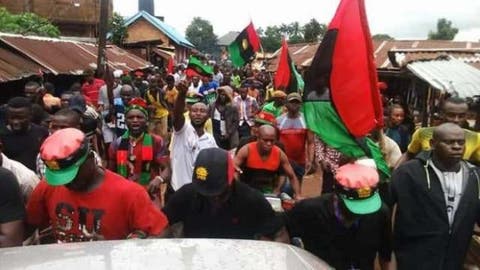 The leadership of the Indigenous People of Biafra, IPOB, has directed members to stop holding any meeting in Enugu for the meantime following the attack on them last Sunday at Emene, Enugu State.

The spokesman of IPOB, Emma Powerful who announced this Monday, said the decision was to allow the group appraise and handle what he called “unprovoked and unwarranted attack by the Nigerian security agencies on armless IPOB members”.

He vowed that the IPOB would retaliate the attack and the killing of its members.

Meanwhile, the Enugu State Police Command has said that the five IPOB members arrested during the attack would be charged to court after investigation into the incident would have been concluded.

The Command’s public relations officer, PPRO, Daniel Ndukwe explained that investigation into the incident was still ongoing, saying that those arrested would be charged to court when the command concludes the investigation.

Ndukwe also said that so far only the five persons arrested on Sunday are in their custody.

Meanwhile, IPOB leader, Mazi Nnamdi Kanu has allegedly ordered his members to defend themselves in the event of any unprovoked attack by security operatives, warning that enough was enough.

Confirming this Emma Powerful said: Yes, our leader Mazi Nnamdi Kanu gave order last (Sunday ) night during his worldwide broadcast that any time Nigeria security personnel attack our members without provocation, IPOB will reciprocate immediately and those saboteurs and inconsequential traitors must go down without delay.

“Time has gone when IPOB would allow no longer soldiers and police in Nigeria uniforms to be killing and slaughtering innocent and unarmed citizens of Biafra. Therefore, Nigeria police must leave IPOB members alone; we are not happy seeing our people are being murdered in cold blood without any offense.

“We remain peaceful in our agitation but nobody should take our stand for granted because we must respond accordingly. Our leader Mazi Nnamdi Kanu is a patient man who loves his people Biafra and other tribes scattered all over Nigeria.

“But as soon as Biafran youths congregate in any location to pray, every Nigerian military formation including police, DSS, Army, Air force stationed in Biafraland will descend on them, firing indiscriminately with the intention of killing as many innocent people as possible because IPOB is a peaceful movement.

“The most shocking and annoying thing is that some journalists report the attack on our innocent members as clash, clash with whom. How can armless Biafran youths clash with well-armed Nigerian security personnel who invaded the praying and meeting place of our innocent members and attacked them unprovoked? Please, we appeal to journalists to always put the situations in proper perspective so that the world would know the true position of what our people are going through”.

He accused the United Kingdom and United States of America of keeping silence in the midst of the attack on IPOB members, saying it was proof that “this ongoing Muslim extermination of Judeo-Christian Biafrans has the official backing of both countries”.