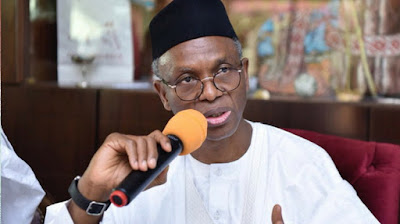 Nasir el-Rufai, governor of Kaduna, says previous administrations in the state used to pay some of the leaders who allegedly organise killings.

El-Rufai said he “will not appease criminals” and continue the practice, vowing to prosecute those fingered in the killings in southern Kaduna.

Speaking during a Channels Television programme, the governors said the leaders usually get “brown envelopes” from previous governments before the killings were stopped.

Despite continued deployment of security operatives in southern Kaduna, the area has continued to suffer attacks by suspected bandits with pockets of clashes between ethnic groups.

Amid the security challenges, some stakeholders have accused the governor of not doing enough and also taking sides in the situation.

But when he spoke during the TV programme, el-Rufai said some of the leaders in southern Kaduna are aggrieved because he stopped the purported payment to them.

“Most of the people saying that have no means of livelihood were living off the governments. The governments before us were paying them money every month, they called it peace money. We stopped it. This is why they say I am taking sides,” he said.

“Whatever they say, I take it. I am the governor of the state. If they don’t abuse me, who will they abuse Anyone that is moderate or promoting peaceful co-existence between various ethnic groups is considered a sellout.

“And for a governor like me who does not appease them because they are used to being appeased, they cause troubles, they organise these killings and then, their leaders are invited by the governor, they wine and dine and they are given brown envelopes. That’s what they have been doing for 20 years.

“And we came into office and we said no more, nobody who does not encourage peaceful co-existence will have access to the governor or the government house. I have no time for them.

“I have no time for nonsense. I will not appease criminals. I will not appease idle people who have nothing to do but to raise a spectre of genocide. They do that to get money into their bank accounts and get donations from abroad instead of standing up.”

The governor added that he is using the security agents to “carefully mark” the leaders indicted in the insecurity in the area, adding that the state will prosecute them “when we accumulate enough evidence.”

“They have come up with other things because the money they got during the election is exhausted and they can say whatever they want to say, he said, adding that “I will not appease troublemaker.”

“I will not tolerate people that incite. I will map them, we will arrest and prosecute them, that’s my style, I obey the rule of law.”