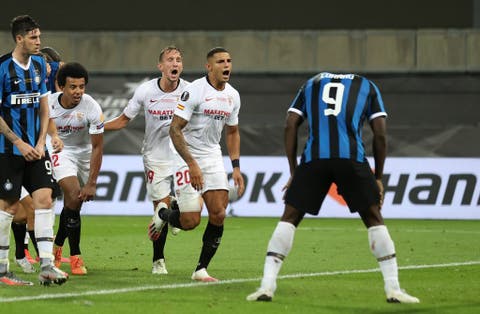 Sevilla have won the Europa League title for the sixth time after defeating Inter Milan 3-2 in their encounter on Friday.

An own goal by Lukaku was Sevilla’s third goal in the match.

Tonight’s match-up between Sevilla and Inter is the 11th Europa League final since it was renamed from the UEFA Cup in 2009.

The final in Cologne is Antonio Conte’s first European final since Jose Mourinho walked out on the high of securing the only ever treble of Champions League, Serie A and Coppa Italia in 2010.

It is nine years since Inter won any trophy.

The Spanish side are the most successful club in UEFA Cup/Europa League history, making the final on six occasions and winning the competition six times.

Sevilla have won their last six European finals and victory tonight equaled the record, currently held by Liverpool and Real Madrid, for the most consecutive final wins in UEFA competition.