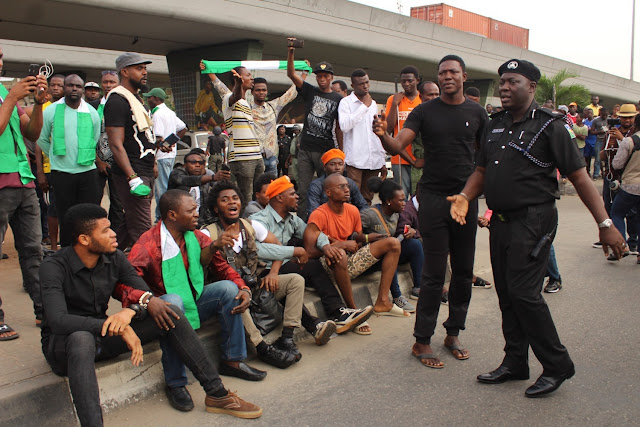 Members of the #RevolutionNow who took to the streets in agitation over some national issues only jumped the gun, the Presidency said on Thursday.

It said the Muhammadu Buhari administration was already addressing the issues the protesters were expressing misgivings about.

Members of the group staged protests in Lagos, Abuja, the Osun State capital of Osogbo and Ore in Ondo State, among others, on Wednesday.

They demanded more efforts in tackling corruption cases, insecurity, poor services, unemployment, poverty, among others, to strengthen the nation’s social and economic well-being.

The Presidency said the Buhari administration was finding solutions to the issues, adding that many Nigerians knew the government had not relaxed in tacking the challenges but was working hard to make the nation surmount them.

The President’s Special Adviser on Media and Publicity, Mr. Femi Adesina, stated this while speaking on Channels Television morning programme, Sunrise Daily, which he joined via Zoom.

Adesina said it would be wrong to describe the protest as a revolution but more aptly an irritation.

“Now, if government is trying and bending over backwards, doing its best to sort out these issues and then you go out with these irritancy and distractions, are you contributing to progress or you are trying to pull progress back?

“All these things are being tackled by government. In fact, that is why government exists: to make sure that the quality of life of the people is better. This is one government that has been working assiduously to ensure that life is better for the people

“The larger numbers of Nigerians know and they understand. But the pockets of people that go on this irritating protest, good luck to them. That’s what I will say so that somebody will not say I’m talking down on Nigerians again.

Adesina described the protests by the #RevolutionNow members as an irritant, which would drag Nigeria away from progress, rather than solve its problems.

“Was it really a protest? By my estimation, those seemed like child’s play because protests, by their very nature, are spontaneous things. They are mass things. But this was just a sprinkle of people trying to be funny

“As far as I’m concerned, it’s nothing to be worried about because when you talk of a revolution, it is always a mass thing, not those sprinkles of those young boys and girls you saw yesterday (Wednesday) in different parts of the country. I think it was just a funny thing to call it a revolution protest,” he said.