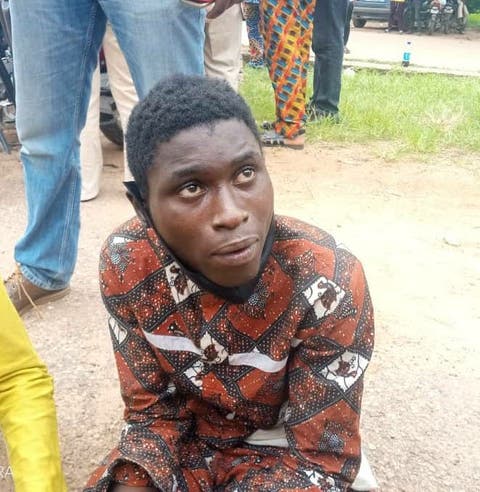 The Oyo State Police Command, Sunday, confirmed the escape of a notorious Akinyele serial killer, Sunday Shodipe from their custody.

The Commissioner of Police in the state, CP Nwachukwu Enwonwu, in a statement made available to newsmen, through the state’s Police Public Relations Officer, SP Olugbenga Fadeyi, indicated that Shodipe escaped unlawfully from the police custody.

The statement read further: “The Commissioner of Police, Oyo State Command, CP. Joe Nwachukwu Enwonwu, psc wishes to state that, the prime suspect in the serial killings at Akinyele Local Government Area, Moniya Ibadan of Oyo State, one Sunday Shodipe ‘m’ 19 years who was arrested and paraded along with two others at the Oyo State Police Command on 17th July 2020 and later charged to court but remanded in Police custody escaped from lawful custody on 11/08/2020.”

“Consequent upon this, the CP wishes to implore the general public to be on the lookout, arrest and immediately inform the Officers and men of the Command when sighted for immediate handing over for further action.”

“He further seizes this opportunity to appeal to any member of the public with credible information as to the whereabouts of the assailant not to hesitate in passing same to the Oyo State Police Command to assist in the apprehension of the offender who is now at large.”

“The CP wishes to unequivocally state that, the Command is committed to the protection of lives and properties of the good people of Oyo State.

“He, therefore, assures that adequate security measures have been emplaced to enable all and sundry transact their lawful businesses in an atmosphere of peace and tranquillity, move from one place to another without any fear or molestation from any individual or groups as he sternly warns criminal elements to steer clear of Oyo State.”

“He further advice angry youths/mobs from taking laws into their hands by carrying out jungle justice when suspected criminals are arrested, but such suspect(s) should be handed over to the Police. The photograph of Sunday Shodipe ‘m’ 19 years old is hereby attached for ease of identification,” the statement concluded.

Recall that, upon Shodipe’s escape from the police custody, residents of Ori-Oke Olurunkole in Akinyele Local Government Area of the state last Friday morning, woke up to the heart-aching news of a middel-aged woman, Mrs Olufunmilayo, who was again reportedly macheted to death, suspecting he (Shodipe) was the one that carried out the dastardly act.

The development, however, infuriated youths in the area to embark on a violent protest, which led to a serious attack on the police.

While reacting to the unfortunate incident, the Caretaker Chairman of Akinyele Local Government, Mr. Taoreed Jimoh, shed light to what led to the protest by the angry youths.

According to him: “We heard that the woman was macheted, she was rescued immediately and taken to UCH, so we heard the report that she died this morning.”

“That was what prompted residents to embark on a mass protest, unfortunately, the peaceful protest was hijacked by hoodlums. The hoodlums went to the extent of pelting security operatives with stones and other objects, but with the help of God, peace is gradually returning to the area and it is under control.”

“I have called Deputy Commissioner of Police on Operations and he has deployed more officers to the area, also, I called the Area Commander and Federal SARS and other security operatives and local security agents such as Soludero and others had arrived the area to calm the situation. The Alakinyele of Akinyele Oba James Odeniran was also on ground to rescue few police officers that the hoodlums manhandled.”

“The killing was carried out by suspected ritualists. Residents suspected a ritualist who was reportedly arrested by the police but allegedly escaped from their custody, he was seen in Akinyele two days ago and yesterday, the residents had to raise alarm and people are suspecting he was the one that carried out the dastardly act,” he hinted.