PGF DG Salihu Lukman replies Oshiomhole for likening him to a pig and an empty brain. 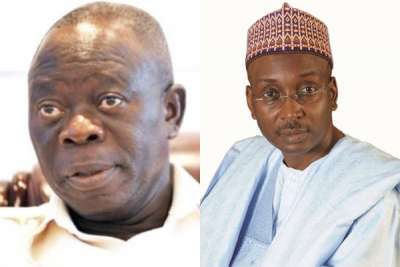 He simply said he held Oshiomhole in high esteem and would not join issues with him.

Oshiomhole had on Monday tongue-lashed Lukman, likening him to a pig and an empty brain.

Lukman had suggested that Oshiomhole in embarking on Edo governorship campaign wanted to re-contest the APC chairmanship.

But Oshiomhole said: “it takes an empty brain to suggest that I only want to stage a come back to become the national chairman. For what? To go and do a reset?”

Reacting to Oshiomhole’s comment on him on Tuesday, Lukman said he should be held accountable for all the comments made, as he was not a voice for any Governor.

“My prayer and hope is that our leaders will be able to have the needed large heart to tolerate one another and tolerate all of us because as human beings, God has created us differently. And it is the basis of the test of leadership – to be able to show an open, accommodating disposition to each one of us,” he said.

He added that “The second statement I want to make is that I grew up in a very complex extended family set up and one of the things it has done in terms of my personal make up is that it imposes on me to be accountable at every point in time.

“When I commit an offence, based on my upbringing in that environment, I never transfer any of my offences to my parents or to any of my senior ones. I was always made to account and where there is the need as part of that accountability for me to be punished, I get punished. Having said that, I am open and ready to account for whatever I had said to the party and the leadership; if in the end the process of accountability requires that I get sanctioned, I will accept and I will remain in this party and continue to contribute in whatever way I can to help the development of the party.”