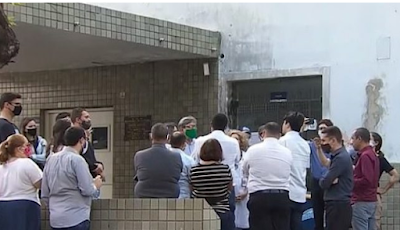 There was outrage in some parts of Brazil after personal details of a 10-year-old rape victim were published online by a religious activist who attempted to prevent her from having an abortion.

It was gathered that the little girl, from São Mateus, a small town in the south-eastern state of Espírito Santo, was admitted to hospital last week after she complained about abdominal pains. The doctors were said to have discovered that she was pregnant.

News of her planned abortion was, however, posted online by an anti-abortion activist, prompting protest outside the hospital where the young girl was due to have the medical procedure.

According to Guardian UK, the girl told the police that her uncle had been raping her since the age of six and that she had remained quiet out of fear.

BBC also reported that the police on Wednesday arrested a man suspected of raping her.

The development has however provoked outrage as a huge number of Brazilian women took to the streets to protect the girl who was being attacked by religious extremists over abortion.

“It’s unbelievable this is happening in Brazil, that part of the population really believes abortion is worse than rape,” Paula Viana, a women’s rights activist, who escorted her, told Guardian UK.

“But we weren’t surprised. We know we have a president who’s supportive of this show of hatred.”

The Pernambuco Department of Health later stated that the procedure was successfully carried out on the girl with judicial authorisation and that “all legal parameters are being strictly followed”.

“She’s very strong. But she is just a child. She will need long-term psychological support. She understands everything that she is going through,” said Viana, while speaking of her wellbeing.

Brazil has strict laws on abortion. The medical procedure is legal in the South American country only if it is the only means to save the woman’s life or if the pregnancy is the result of rape.