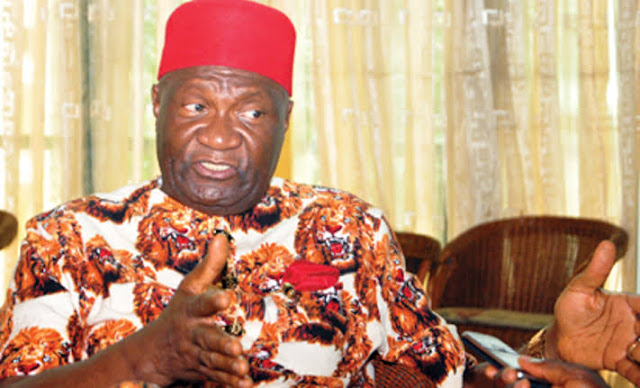 The President-General of Igbo apex socio-cultural organisation, Ohanaeze Ndigbo, Chief Nnia Nwodo, has called on the leader of Indigenous People of Biafra, Nnamdi Kanu, to change his unfriendly attitude and instead build bridges for the Ndigbo in the country.
Nwodo in a statement on Wednesday by his Special Adviser on Media and Publicity, Chief Emeka Attamah, said this  when the leadership of IPOB visited the National Executive Committee of Ohanaeze at its monthly meeting on Tuesday.
Nwodo was quoted as saying IPOB and Ohanaeze Ndigbo shared the same cause of fighting to emancipate Ndigbo, but added that Ohanaeze Ndigbo still believed in dialogue and the restructuring of the country.
The Ohanaeze boss stressed that the group had no quarrel with Kanu, saying, “This latest development should be the opening of the door for mutual cooperation between IPOB and Ohanaeze Ndigbo.”
Earlier, IPOB team, led by one of its principal officers, Benjamin Madubugwu, told the Ohanaeze Ndigbo leadership that the team came in continuation of the rapport reached with Ohanaeze at the Anambra State reconciliation meeting.
It called on Ohanaeze Ndigbo to assist in working towards the de-proscribing of IPOB.
Madubugwu said “IPOB is not a terrorist organisation, it was given a bad name in order to hang it.”