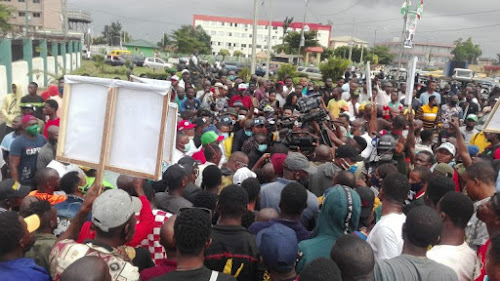 Governor Godwin Obaseki of Edo State on Thursday stormed the State House of Assembly, with hundreds of supporters.

Also with Obaseki was his deputy, Philip Shaibu and other top government officials.

The supporters who sang solidarity songs, were also armed with placards bearing inscriptions such as “Edo is not Lagos, 4+4” and others.

It was gathered that the presence of the Governor was to show solidarity to the few lawmakers who are loyal to him, following siege laid on the Assembly by police operatives.

The presence of heavily armed policemen created chaotic atmosphere, as motorists drove furiously, while pedestrians scampered for safety, to avoid any ugly incident.

Over 30 vehicles of the marked Operation Wabaizighan and others, blocked the entire section of the Assembly premises of the Ring Road.

The police operatives, led by a Deputy Commissioner of Police (Operations), Ayoola Ajala, had earlier taken over the entire premises of the Assembly complex, following alleged planned forceful invasion of the Assembly by lawmaker-elects who are loyal to former National Chairman of APC, Adams Oshiomhole, but are yet to be inaugurated.

This is coming a day after seven members of the Assembly loyal to Governor Godwin Obaseki, led by the Speaker, Frank Okiye, impeached the Deputy Speaker, Yekini Idiaye.

Idiaye was allegedly impeached for declaring loyalty to candidate of the APC in the September 19 gubernatorial election, Pastor Osagie Ize-Iyamu.

Okiye had also raised the alarm on Wednesday, that Governor Hope Uzodinma of Imo state and some APC stakeholders in Edo state were planning to import a fake mace with which to invade the Assembly by the yet-to-be-inaugurated lawmaker-elects.

Addressing the crowd, Obaseki said: “I want to assure you that as governor of the state, I will do everything within my power to protect the sovereignty of the House.

“Nigeria is governed by the constitution and me. Mr. President has always said we must follow the rules of law and do things according to the law.

“Nobody is above the Constitution of our country and so go about your regular duty as a parliament, the way Constitution prescribed.

“For us as Executive, we will use the instrument available to us constitutionally to protect the House and the state.”

Earlier while addressing journalists inside the premises of the Assembly, the Speaker, Frank Okiye confirmed the alleged plan to invade the Assembly by the lawmaker-elects.

He, however, said that the “presence of security operatives and the ongoing renovation work on the Assembly building should deter those planning to invade the Assembly.”