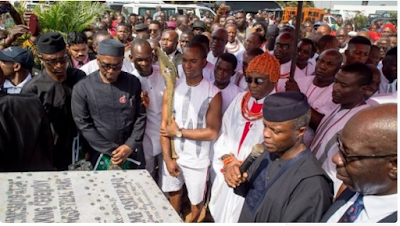 Adams Oshiomhole, former national chairman of the All Progressive Congress (APC), has accused Godwin Obaseki, governor of Edo state, of deceiving Vice-President Yemi Osinbajo to lay the foundation for a “phantom industrial park” in Benin, the state capital.

In November 2017, Osinbajo laid the foundation of the park at Iyanomo community in the state capital.

Osagie Ehanire, who was then minister of state for health; the oba of Benin and even Oshiomhole were among the dignitaries at the event.

Speaking with state house correspondents after meeting with President Muhammadu Buhari on Monday, the former national chairman of the ruling party said the park had become a “den of robbers and kidnappers”.

“Some of the things that have made our campaign easier is the fact that we have established a tradition in Edo state, that don’t believe any politician till you have seen action particularly if that politician is already in office,” he said.

“We have 192 wards and we have been going round to ask just one question. Have you seen government presence in this ward since four years ago when I left? The answer has been no because the current governor spends all his time on memorandum of understanding (MoU) for refinery, which remains a MoU. It is not on ground.

“He got Vice-President Yemi Osinbajo to do the groundbreaking for an industrial park where he claimed that many Chinese and Singaporeans were anxious to relocate factories and create 300,000 jobs. Now, that place has become what we can call kidnappers track because people rob and go into the bush. There is nothing going on there. Not that the progress is slow, absolutely nothing is going on there. All the promises he made on TV where he signed different agreements with people, none of them is in progress.”

‘I WON’T WRESTLE WITH A PIG’

Responding to a question on the allegation of Salihu Lukman, director-general of the Progressive Governors’ Forum, Oshiomhole said he would not wrestle with a pig.

Lukman had alleged that Oshiomhole is frustrating the newly national caretaker committee of the ruling party to pave way for his return as national chairman, but Oshiomhole asked the reporters if “I look unemployed?”

“When I was removed as national chairman, Edo was APC… So, do I have to win Edo to become the chairman? “So, what they don’t understand is that, it is not the office of chairman that made me who I am. It is my pedigree from my days as labourer in the textile industry to be the general secretary of textile workers all over Nigeria and becoming the president of NLC.”

‘I FOUGHT GODFATHERS FOR OBASEKI TO EMERGE’

“There is no village I go to that people do not know me and it is this that I used to override the godfathers in Edo State for two consecutive terms and even got the governor elected through elections, no violence before becoming the national chairman.

“So, my attitude is not to reply the noise and it is coming from somebody who says he is an employee and appointee of Progressives Governors Forum. He is just like the cowards that are using him that are not able to come out. Otherwise, you should ask this guy, who is now an election expert.

“He contested for senate against Makarfi, he lost. He even contested against governor el-Rufai during the primaries and he lost, before Fayemi unilaterally appointed him the DG. So, if he is now the spokesman abusing me and all of that, you want to drag me to his level? No! A gentleman does not wrestle with a pig, if you do you will always be stained and I don’t want to get into that.”