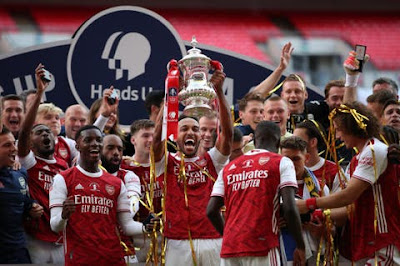 Accolades have been pouring in from different parts of the world for English club side, Arsenal F.C., after it gallantly gunned down its 14th FA Cup when its captain, Pierre-Emerick Aubameyang, struck twice to beat Chelsea 2-1 in the final on Saturday.

Notable Nigerians including religious leaders and politicians as well as other football enthusiasts have since painted social media red, showering encomiums on the Gunners who gave Frank Lampard’s men an unforgettable beating at an empty Wembley stadium last night.

It was earlier reported that Christian Pulisic gave Chelsea the dream start but the Blues unravelled after Aubameyang was brought down by Cesar Azpilicueta inside the area and converted the resulting penalty.


A brilliant finish from Aubameyang 23 minutes from time then earned Mikel Arteta silverware in his first season as Arsenal boss before Chelsea were controversially reduced to 10 men when Mateo Kovacic was shown an extremely soft second yellow card.

Arteta has gained plenty of plaudits for his tactical nous during his first eight months in a managerial role and the Spaniard managed to reorganise the Gunners during the first-half drinks break to change the momentum of the game.

Nigeria’s Minister of Interior, Rauf Aregbesola, enthused, “We fight with dignity, and win with pride. Yes, red is the colour of champions.”

Also, former Vice-President Atiku Abubakar tweeted a synoptic “Arsenal! #FACupFinal” accompanied with emojis of a medal and a cup.

Minister of State, Labour and Employment, Festus Keyamo, wrote, “The other clubs need to calm down and respect Arsenal! We are FA Cup winners for a record 14th time!”

Another tweep, @misstelecomnig3, wrote, “I’m a United fan, but I supported Arsenal yesterday. Funny enough, my 9 years old son woke up early in the morning after his normal daddy good morning, it followed with daddy Arsenal will win. I was surprised. Festy my namesake, Anthony all the way.”

But some tweeps have criticised the officiation of the match.

@AbdullMBaba wrote, “Not after what ref Anthony Taylor & VAR did, they are a total disgrace. Unlucky for the Blues. Y’all to good next year through.”

@okedeemmanuel said, “Arsenal should equally calm down as FA cup does not guarantee them Tuesday and Wednesday football where real men play soccer come next season. Congratulations to the Gunners anyway as they seem to have been gunned down from the champions league.

@ChukwudiebereO2 stated, “FA’s politics favoured Arsenal. England wants more teams, especially the famous ones in European competitions, in order to generate more money, to cushion the effects of Covid-19. The ref was a complete rogue.”