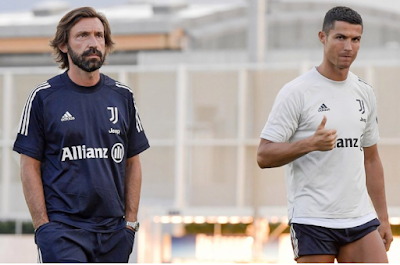 New Juventus boss, Andrea Pirlo, has warned Cristiano Ronaldo that he must adapt to different tactical systems under him.

Pirlo was officially unveiled by the Italian club on Tuesday, after he was appointed as Maurizio Sarri’s successor.

Under Sarri, the players were deployed in a strict 4-3-1-2 formation.

Although they won the Serie A title again, they flopped in the Champions League.

Pirlo is now under pressure to deliver what Sarri failed to and has given an hint as to how he will work, calling for “sacrifice” from his players.

“The system can vary from game to game, defending with three and building with four,” he said at a press conference.

“I have already spoken with Ronaldo, and we will have time to address tactics and roles on the pitch.

“[Paulo] Dybala was never for sale, he is part of the project. If both can they match on the field? As long as there is sacrifice and altruism.”