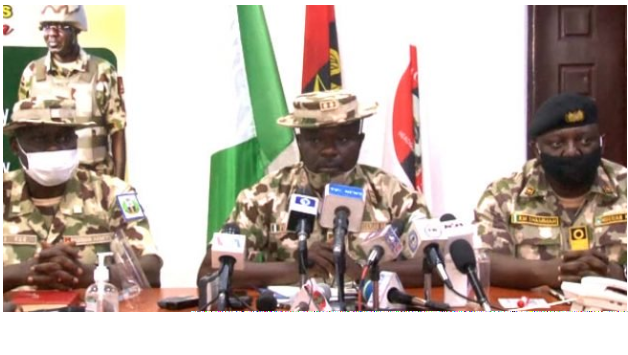 The military has asked Babagana Zulum, governor of Borno state, to be mindful of his remarks against the troops fighting insurgency.

Last month, the governor accused soldiers of being behind an attack on his convoy in Baga, a town in Borno.

The attack was believed to have been carried out by Boko Haram insurgents but Zulum attributed it to a sabotage from the army.

He later said he would mobilise hunters to do the job if the troops were unable to secure Baga.

But after the military’s investigation into the attack, Felix Omoigui, a major-general and deputy theatre commander of Operation Lafiya Dole, said the governor’s claims were untrue.

“The governor of Borno state believed these allegations levelled against troops of the 19 Brigade in Baga given his recent utterances,” he said.

“Remarks of highly placed persons are capable of demoralising the troops which would negatively impact on operations and the confidence of the locals in the military.

“Allegations of such nature could be avoided if the military authority was contacted on issues concerning troops activities before going public.

“The realisations that the allegation emanated from security agencies could trigger reactions and animosity among troops and attendant negative consequences.”

Omogui also said the allegations that troops were engaged in farming in the area were false, adding that the prohibition of troops from engaging in farming and fishing activities in area of responsibility is contained in the standing operating procedures.

“The allegations were conjured by some overzealous security agencies who for personal glory and without recourse for the tenets of inter-agency cooperation decided to propagate falsehood,” he said.

He added that the military’s investigative team found that the entire area of Baga was too heavily mined with improvised explosive devices (IEDs) to encourage any farming activity, and that 55 mines have so far been detonated since the town was reclaimed.