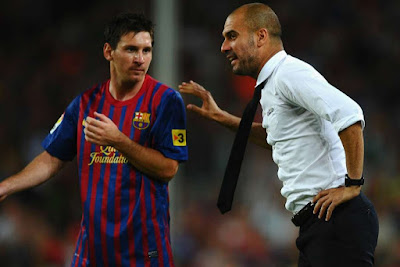 Pep Guardiola and Lionel Messi had a conversation over the phone last week, over the possibility of the player joining Manchester City, ESPN reports.

Messi shocked Barca on Tuesday, when he sent a fax stating his intention to leave this summer.

The LaLiga club responded by asking him to remain at the club he joined almost 20 years ago.

City are one of the clubs monitoring Messi’s future at the Nou Camp and are crunching numbers to see if they can work out a deal for the 33-year-old.

It is believed they have grown more optimistic following Guardiola’s talk with Messi last week.

The two men spent four years together at Barca between 2008 and 2012, and Guardiola spoke to the Argentina superstar about the project that awaits him in England if he decides to make the move.

The conversation took place a few days after Barcelona suffered an 8-2 defeat to Bayern Munich in the Champions League.